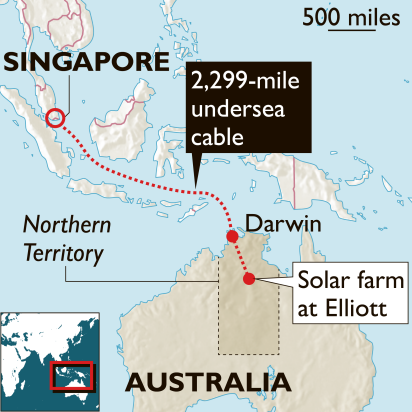 Singapore has taken on the challenge of becoming a world leader in sustainability. As one of the most carbon-emitting countries per capita, the country has made an ambitious goal to have net-zero emissions by around 2050. Its most recent project is an international partnership to bring solar energy from the Australian outback, 3,100 miles away. This project will become the world’s largest solar farm with 28 million solar panels generating enough energy for all of Australia’s Northern Territory and about 15% of Singapore’s grid. With a cable running mostly underwater, this project will completely change the way we think about sustainability, especially in the Pacific-Asia region. This is on top of Singapore already using floating solar panels to bolster the grid because of its space deficiency. A long-distance dual-nation commitment like this could be the start of something great in the region.

This project exemplifies the need for a strong world commitment to fighting climate change. Australia very well could’ve built the solar farm without Singapore, electrifying more of its domestic grid. However, Singapore is helping bear the enormous capital burden and is in turn getting clean energy that would otherwise be impossible to produce on the island. This is amazing and should be credited as being a star example of international sustainability partnerships. However, it is worth questioning the social justice of this project. Is this an example of affluent countries being able to implement more renewable energy than poorer countries? The underwater cable will pass islands like Papua New Guinea and Timor-Leste, both with 30% of their populations under the global poverty line. Singapore will make a huge reduction in its energy carbon emissions, but could it have taken a tiny fraction and shared the benefits with neighboring poorer countries? In our transition to a clean energy world, we must focus on the big picture rather than isolating ourselves to win the “First-in-Class” trophy. This isn’t to say that it still isn’t possible for a project like this to support other islands in the region. Perhaps, this is only the blueprint and more are in the works. Indonesia has granted the right for the cable to use its waterways which could be the beginning of a network electrifying islands across the region from international solar farms. However, I am skeptical because big projects like this only get done if enough money can be put on the table. Money that poor nations work hard just to survive with.

Regardless of the future implications of this project on the Pacific islands, I believe it will help put pressure on big countries like the US and China. It highlights that the urgency of our situation requires big action now and if the infrastructure is not there yet, build it. It doesn’t put the blame on who started the crisis, it just looks forward and recognizes where Singapore wants to be in thirty years. What will it take for other important countries to realize they must do the same and that they don’t have to go it alone? For North America, could this mean a potential partnership between the US and Mexico with reach into the Caribbean? Could China partner with neighboring countries to make a collective effort? I think this is a possibility if we can keep the politics of it aside. The US sure has millions of acres it isn’t using that could be turned into amazing solar projects to electrify entire regions.

The bottom line is that access to clean energy should be a human right that isn’t exploited. I believe the Australian-Singapore partnership displays that the time to build transition infrastructure is now. It’s time to put money on the table and get projects like this in sunny regions across the states. And who knows, maybe the clean energy transition will help bring world peace through partnerships and a unified goal of saving the planet.

Who should pay to fix the planet?
Gasoline prices will influence peoples’ lives