The Nile Projects: Using music as a tool to rethink watersheds and cultivate sustainability 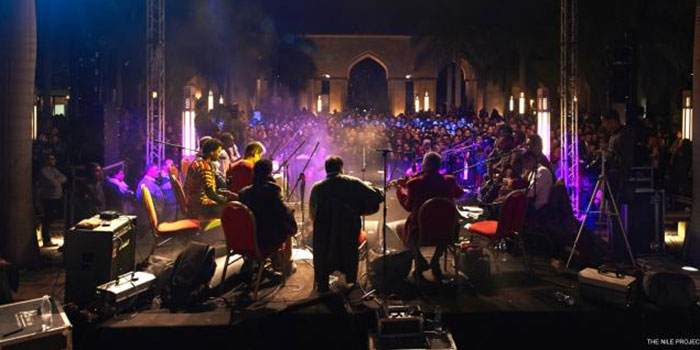 The stage was dark at Northrop Hall.  Then it started. Sophie Nzayisenga from Rwanda is as a queen, a spirit—animate—enticing us in.  She and the inanga instrument sang together.  The music took over the hall, filling us up.  She would look up towards us every so often as if saying, “Come on. Feel the joy.” And then back the task at hand—bring the spirit into the concert hall and a smile would overtake her face and she would be back into the music.

More musicians had entered at this time.  Each had a distinct way of moving, being, and playing.  They wore things from T-shirt and jeans to kanga.  What they had in common? They were amazing musicians and all part of the Nile Project.

“You are in for a big journey tonight.  We will go all over the Nile.” said Ugandan musician Micheal Bazibu.

The Nile Project was founded in 2011 by Egyptian ethnomusicologist Mina Girgis and Ethiopian-American singer Meklit Hadero to address the Nile Basin’s cultural and environmental challenges at the core of deep conflict between people and people, people and the environment, and sustainability in the past, present, and future.

Since then, the Nile Project has gathered musicians from up and down the Nile River to come together and cultivate the sustainability of their ecosystem.  “We need to rethink how we see our water and our ecosystems,” said President Mina Girgis at intermission. “Before being here, we were just traveling in California, where many of the issues are similar to what is happening right now in the Nile Basin.  We are not alone.  It is something we all need to think about.”

So how do music and sustainability mix?