University initiatives are lighting the way for solar energy! 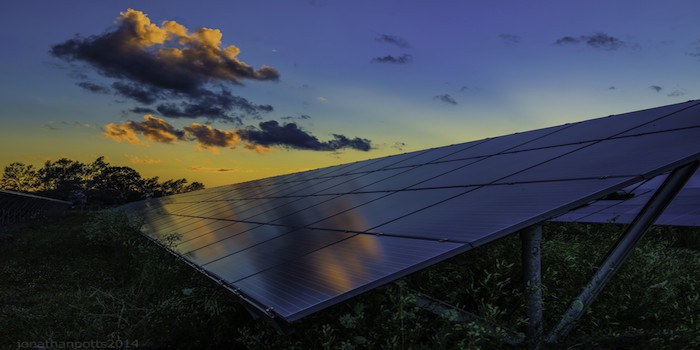 The looming shadow of climate change constantly hangs over our heads, the effects only worsening with each year. This issue is one of great severity and uncertainty; however, that does not mean there aren’t efforts that need to be celebrated. We so often focus on the bad news and all of the actions that need to be taken, while what we are doing gets overlooked, making it feel as if no progress is being made. In an effort to celebrate such actions, let us shed light on our university’s efforts to combat climate change and join in on the renewable revolution.

In 2008, President Robert Bruininks signed the American College and University Presidents’ Climate Commitment (ACUPCC). This commitment was launched in 2007 by a group of twelve presidents of higher education institutions concerned about the destabilizing climate. According to the University of Minnesota’s Climate Plan, “The ACUPCC signatories recognize global climate change as the defining challenge of the 21st century. The commitment also acknowledges the important role universities play in research, education, and modeling solutions relative to this change.” Signing this commitment declared that the University would commit to the fight against climate change by establishing a goal to completely eliminate greenhouse gas emissions from campus, also known as climate neutrality.

In order to achieve this goal, the university developed a climate action plan in 2011. This plan implements strategies to reduce greenhouse gas emissions with a goal of climate neutrality by 2050. Multiple sustainable efforts and practices have been implemented including a waste management and recycling program, steam plant renovations, and the use of efficient vehicles and alternative transportation on campus.

According to the plan, “These initiatives and many others have contributed to the University being a national leader in sustainability. In fact, the University of Minnesota, Twin Cities was among the first large research institutions to become a signatory to the ACUPCC and it was the first Big 10 institution to do so. Since the University signed the commitment, two other Big 10 schools have joined and other Big 10 institutions have engaged in similar efforts to reduce their emissions.” I believe this information is extremely important and that it should be broadcasted to the students and staff on campus. Personally, I was astonished by the university’s efforts and filled with pride that they had made sustainability a priority.

The work towards climate neutrality is still in full force and gaining speed as the university works towards the 2050 deadline. When the plan was first developed, conservation efforts were the main focus, being that renewable energy was relatively new. However, renewable energy is now more economically viable and feasible than ever making it a solution the university can now pursue.

Recently the University has turned toward solar energy as an option. According to University’s recent press release, the University bought two solar garden subscriptions for off-campus facilities and has developed a request for proposal for on-campus solar installations. These on-campus installations will be located in five different areas: two on the St. Paul campus, two on West Bank, and one on East Bank. According to Shane Stennes, the University’s Sustainability Director, “We are just waiting on responses from bidders and vendors, so we can select a vendor that best fits our specifications and requirements.” Obtaining these solar installations is a long process, which makes it hard to estimate when the project will be finished, however, they hope to select and hire a vendor by February of 2017.

This project emphasizes the University’s efforts to become sustainable and is also a prime example of how student involvement can make a difference on campus. The Solar University Delegation is a student group on campus that had a hand in this project. The group is funded by the DOE Sunshot Initiative and managed by the Midwest Renewable Energy Association, their mission being to help the University develop plans for solar energy implementations on campus. The group had a substantial part in this project according to Stennes, “The Solar Delegation played a number of different roles throughout the project that I think were really important and helped bring it to where it is today.” A few of these roles included helping assess feasibility, drafting language for request for proposals, and analyzing possible sites, all of which contributed to the final document that was sent to potential vendors. One of the most important yet simple roles they had was keeping the conversation going, which is vital in the progression of any project.

Witnessing these movements made by students and faculty of this University fills me with hope for our future, despite the uncertainty that lies ahead. The recent election depicted how politically divided our country is, leaving many questions for the future of sustainability. When speaking with Stennes I asked him for his thoughts on the future of our university’s sustainability efforts as well as the future for renewable energy. His response was a comfort to hear amongst so much uncertainty, “Our involvement in the climate action plan will continue because it is largely based off of energy conservation measures that would make sense regardless of the political party that happens to be in the white house or in congress.” Stennes went on to address that a lot of environmental actions are driven by state requirements, which leaves Minnesota in a positive condition as we are a leader in the movement to renewable energy.

Stennes is hopeful about solar in Minnesota, noting that regardless of national policy, “a lot of the renewable energy investment is happening because the economics are good and that market’s going to drive those decisions. We have to wait and see but there are certainly economic and other factors such as state regulations that suggest that whatever happens at a national level, there’s going to continue to be progress in this area, regardless.” Stennes also predicts an annual savings of $800,000 over the 25 year period for the 2 Megawatt solar subscriptions that the University of Minnesota recently purchased.

It’s easy to feel overwhelmed and focus on the negatives when faced with a challenging situation. However, this is when it is most crucial to concentrate on the positive. Positivity provides hope which is vital in any difficult situation. The University’s efforts in sustainability and their continuation with the climate action plan should be an inspiration that keeps us motivated to continue our work towards a sustainable future. This is why I challenge you to focus on the progress we have made. Let it motivate you to keep the conversation going and to take action, for the power of even a single voice is stronger than silence.

Advancing cities’ strategies for adapting to climate change
2016: An eventful year for IonE