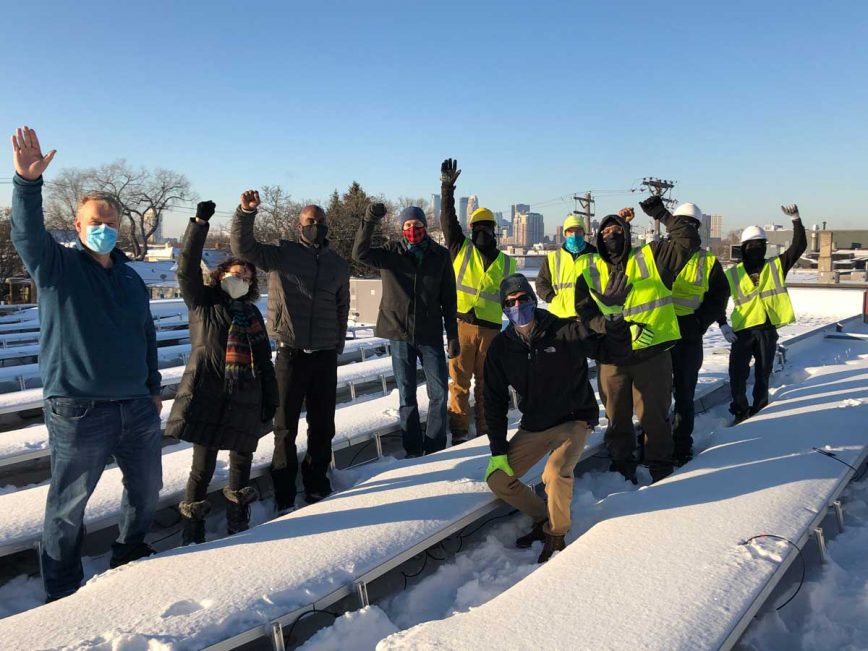 Challenges as large and complex as climate change require action at multiple scales. Renewable Energy Partners Inc. (REP), a Minneapolis-based, minority-owned solar developer, is uniting its work at the local level with the complex global effects demonstrated by Climate Action Simulations. REP’s vision is to use the Clean Energy Transition to address local disparities in education, skills gaps, and economic well-being in Minneapolis.

REP is a solar installation and development company founded in 2014 after Minnesota passed its Solar Jobs Act. Jamez Staples, the CEO of REP, saw that solar energy was emerging in other parts of the country, and he realized the same business opportunity existed in Minnesota. Growing up in North Minneapolis as an African-American, he experienced Minnesota’s racial disparities and wanted to address that issue. He founded REP as a business that incorporates equity and social justice from the ground up. Staples has a background in marketing and sales, not in environmental science, but he was deeply inspired by Arctic explorer Will Steger in the fifth grade to take action on climate issues. He saw renewable energy as a fast growing industry, and as an opportunity to create jobs in his community. REP is committed to tackling climate change by increasing access to renewable energy production and building community resilience. Through a formal agreement, REP collaborates with the University of Minnesota, including the Institute on Environment (IonE), on multiple projects, including a North Minneapolis microgrid project that offers a research platform on communal energy storage, with an emphasis on school partnerships and green job training.

Improvements in energy storage and lower costs for efficient, long lasting batteries enables independent energy networks which do not rely solely on connection with the local utility. These smaller scale electrical grids, or microgrids, are powered by on-site renewable energy facilities plus battery storage to meet critical community-scale demand for electricity during a grid power emergency. As a partner with the Institute on Environment, Renewable Energy Partners is one of three separate demonstration sites in Minnesota that are pioneering pilot energy storage projects. With advanced batteries funded by the University, REP can demonstrate various configurations of solar-plus-storage and the efficacy behind such systems. This innovative pilot project will encourage further investment in renewables and energy storage, demonstrate energy resilience, and create new jobs in the field.

REP provides training for K-12 students and young adults in solar system installation, and other electrification and energy efficiency skills. Trainees earn certifications and credits toward their high school degree or a post-secondary degree. Based on an apprenticeship model, the earn and learn training allows the students to pursue a career in the field of clean energy. The program began with helping students in alternative schools due to the historically high drop-out rate, and is expanding to other groups under-represented in clean energy fields. The training for students not only develops useful skills but also helps them to build resilience in their communities. Staples’ entrepreneurial spirit and deep roots in his community allow him to build a company that creates pathways to STEM and green entrepreneurship in a hands-on environment for communities of color.

This project will help Staples and his team at REP continue their goal of reaching a triple bottom line- economically, socially and environmentally-through its solar and resiliency developments.

There’s Hope: Looking to the Leadership of the Youth, Indigenous Peoples, and Subnational Governments By Revée Needham (HHH MURP student)
UMN students take the prize at Moving the Cities 2021