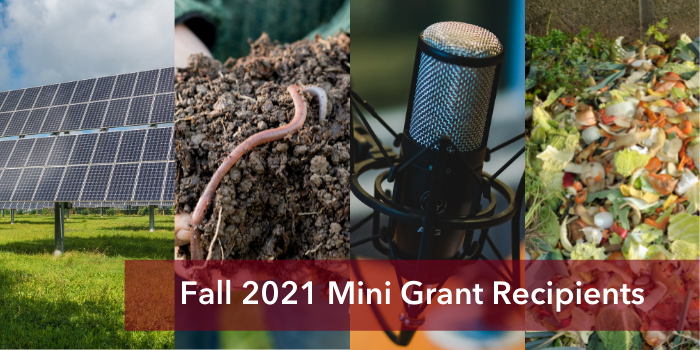 This fall, as the seasons changed and the temperature dropped, teams across the University of Minnesota were hard at work developing fresh strategies to address important environmental and sustainability issues.

Two times a year, the Institute on the Environment offers support to bring these projects to fruition through our Mini Grants program, taking into account the level of interdisciplinary collaboration and the strength of the project’s goals, design, budget, and potential impact. The last ten years of mini-grants has resulted in over $1.75 million in funding for over 300 projects at every University of Minnesota system campus as well as many Extension and outreach center locations.

From earthworms to podcasts, from agrivoltaics to a fly-mediated circular economy, meet the winners of the Fall 2021 mini grants:

Minnesota discards 2.1 million tons of food annually, with almost half of that diverted to landfills. This is not only an alarming amount of wasted product, but also human capital and financial investment. Food prices account for this significant waste and direct the dietary choices for populations most sensitive to changing food prices, contributing to food insecurity. This research is aimed at reducing food waste by developing a black soldier fly (BSF; Hermetia ilucens) circular economy-based system that uses food waste as a resource and converts it into valuable products. This concept will increase sustainability by converting organic food waste produced at the University of Minnesota into organic fertilizer and animal feed resources. These products can then be reintroduced in the food production system.

Advancing the Human Right to Water: Justice for Rural Communities

When first recognized in international law, the human right to water focused exclusively on safe drinking water and adequate sanitation services. Recently, advocates have begun to expand this rights framework to more fully speak to sustainability for future generations. This project aims to draw on research on the rights of rural communities and two cases of natural resource extraction in Colombia (El Quimbo hydroelectric dam and the proposed La Colosa gold mine) to advance a human rights framework for natural resources and food systems. The team seeks to (1) understand and document the human rights implications related to water in the two cases of rural communities in Colombia; (2) assess and disseminate recommendations on how the human rights framework could better capture and advance natural resources and food systems for human security and potential; and (3) contribute to public debate about a human rights-informed approach to sustainable land use and safe drinking water in Minnesota.

Solar power is, and will continue to be, a vital power source as we move towards a carbon neutral future. This project proposes the development of lower cost maximum power point trackers (MPPTs) for use with solar power systems. MPPTs are critical for the functionality and efficiency of modern solar installations, but their high costs make solar power unaffordable for many communities. For everyone to transition toward being carbon neutral, lower cost solar power installations must become a reality. Funding for this project will give undergraduate students the opportunity to collaborate with graduate students, faculty, and industry professionals to develop these power electronics. The outcomes of this project will include the analysis of existing products and the development of prototype electronics. This project will help to develop lower cost solar technologies and prepare students to work in the field of renewable energy.

In the US rural electrification projects of the 1930s, the expertise & the technology for energy transition preceded the social will needed to build the requisite infrastructure. Public art was a key piece of the social infrastructure that enabled energy transition. The 21st century seems to follow a similar pattern: while we have the technical know-how and technological capacity to transition from harmful fossil energies to renewables, we lack the social and political will to embrace this inevitable change. And our delays come at great cost to people and the planet. This project leverages regional museums as sites of historical and art-based learning to engage the creativity needed to move local communities forward in co-designing a just, social-technological energy transition. This team plans to study the feasibility of a regionally travelling exhibit of historical, contemporary and community-engaged maker-activity public art centered on energy transitions in the Lake Superior watershed.

IntelEarth is an early stage company launching in 2022, specializing in agrivoltaics development and monetization. We are also planning to support these and other sustainable development through our technology based Community Adaptation Programs (CAPs).

Mini-grant funds will be used to further pollinator and other agrivoltaics research toward reaching an operational development study phase. Research for this project will be based on an existing 300kw solar-only project at Connexus headquarters where the team plans to implement their first operational study upon completion of this research project.

This project aims to identify the most efficient and scalable environmental, social and monetary optimizations, in proportion to one another. This analysis is a strong catalyst for providing swift expansion of the usage and understanding of agrivoltaics within the industry and among community users.

In Cameroon, farming is the way of life of about 70% of the population. Rural communities in Cameroon are reporting the gradual disappearance of a certain variety of crops. To respond to this threat of food security, an agricultural training program was created at the Centre Agro-Écologique Jean Makonn Bayiha (CAE/JMB) to study these ecological and environmental challenges. A team of four people will travel to Cameroon to collect baseline data on approximately 20 hectares of palm trees, cacao, plantains, macabos and peanuts at the CAE/JMB. Geographic Information Systems (GIS) will be used to coordinate spatial base data, collect site data, and eventually engage learners with the data about the land and crops. Interviews will be conducted to collect traditional farming practices and stories of the land.

As podcasts have grown in popularity, they have become an important part of the toolkit scientists, journalists, and creatives use to reach the public. Podcasting Science seeks to develop a three-part pilot podcast series, train a cohort of student producers, and build staff capacity to support future podcasters. The project builds on existing work by Science Communication Lab (SCL) and the College of Biological Sciences (CBS) that trains student scientists, writers, and designers to become compelling storytellers across media and platforms. Working with staff mentors from SCL and CBS and a podcast producer whose work has appeared on National Public Radio (NPR), students will receive the support and supervision necessary to develop as writers, audio producers, and project managers while honing communication skills that can be applied in academia, industry, and beyond.

Invasive earthworms are widespread ecosystem engineers that create cascading environmental disturbances when dispersed. Most research seeks to understand the effects of invasion, but information on human’s role in dispersing exotic earthworms is scattered. Earthworm dispersal and introduction involves diverse human activities such as industry, recreation, and development. Thus, understanding human vectors requires communication across interdisciplinary stakeholders and scholars. This project seeks to reach out to stakeholders and synthesize information into a journal manuscript that critically reviews human’s role in global-scale earthworm invasion, assesses how dispersal varies with human culture, and provides insight into future earthworm invasion with a changing climate.

On the southern border of Nepal, there is a forest that is managed by the communities it serves. In the buffer zones of Chitwan National Park, 21 villages organized into Community Forest User Groups (CFUGs) have taken on the responsibility and benefits of a now well-established Community Forestry Management (CFM) program. This project will document the process that communities took on to conserve and expand a biodiverse forest and its associated ecosystem services. The goal of this research is to document and understand the factors that lead to success or failure of CFM.

Extinction Simulation Landscapes is a film about how we use the land to predict the future of human-caused ecological devastation. This project focuses on sites of experimental simulation of worse case scenarios of climate change, Superfund sites and places where species are under extreme risk of extinction, and sites of biome remediation and rewilding. By linking places that range from seemingly natural to severely denatured, the film enmeshes landscape with technology and culture across vast time scales, from the immediate threat of destruction to planetary timelines of radioactive half-lives. For this local chapter of the project, we are focusing on the selected remnants of and rewilded prairies and woodlands of the Great Plains.