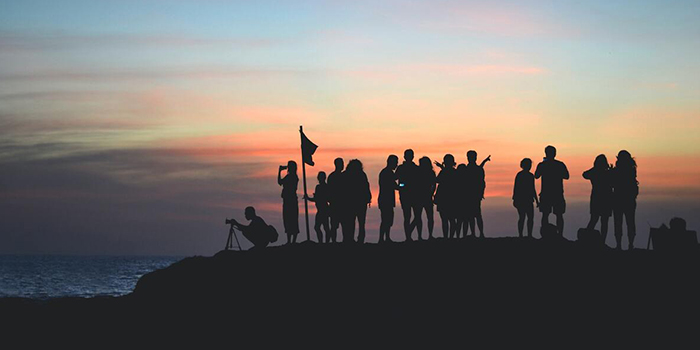 We live in difficult times.

It seems like most days bring challenging news about stoked embers of conflict and people and places in harm’s way. Some of this harm could be avoided, but the problems underlying the harm endure.

For example, those of us working on climate change are pretty used to public skepticism and outright denial of science, but now we see shocking rejection of science around COVID-19. It seems that a lack of trust in science now extends to public health.

And our ability to overcome this denialism is stymied by political and ideological fragmentation. We are deeply divided, and our country is struggling to find sure footing as we head into our November election.

Again, these are tough times.

I want to draw your attention to two key aspects of where we are today.

First, several of the environmental issues that researchers and educators have been talking about for years are raging before our eyes.

Millions of acres have burned in the west this fire season – so far. Of the ten biggest fires that have ever burned in California, half of them have occurred this year. And while those fires were burning, one of the largest hurricanes recorded in the U.S. came ashore in Louisiana. Last week there were four storms churning in the Gulf of Mexico, making 2020 the most active hurricane season on record. Fire and storms are natural processes, but these natural phenomena are juiced with the power of a warmer atmosphere, rising air and sea temperatures, and mega droughts.

A recently released UN Global Biodiversity Report explains that none of the international biodiversity goals set 10 years ago have been achieved. Progress has been made on aspects of invasive species control, natural area designation, national biodiversity strategies, and the understanding of biodiversity science. But many other issues including: conservation of fisheries stocks, pollution levels, threats to coral reefs, and protection of ecosystem services are all static or slipping backward.

And, second, we can’t talk about any of this – climate change or biodiversity conservation – without also talking about racial justice and systemic inequities. We certainly can’t in 2020, the year of George Floyd.

Here’s what’s also happening in 2020: We see these threats clearly. The effects of climate change, a pandemic, and racial injustice are all laid bare before us. Of course, some scholars and practitioners already saw these vulnerabilities and truths and have been working to dismantle them and raise awareness. But others were “surprised” by the political polarization of 2016, or “confused” when the public wasn’t embracing the guidance of scientists. The last several months have cleared the fog on this surprise and confusion.

One of the most important things we can learn from seeing these patterns so clearly is the interconnectivity of these issues.

For example, Black Lives Matter leaders, allies, and thinkers not only rallied against police brutality, but they also shined a light on racism in the environmental movement. They helped us see the connection of racism and environment in the viral video of a birder and a white woman threatening him in Central Park; the disproportionate impacts of climate change across income and neighborhoods; the racist origins of some of the most prominent environmental groups; and the lower numbers of Black people, indigenous people, and other people of color in environmental professions.

It’s no longer viable to claim concern about biodiversity or climate change without connecting it to concern for racism and marginalization. And that’s because it’s no longer viable to deny, ignore, or leave unaddressed the link between the systems that expose people to environmental harms and the systems that subject people to other inequitable policies and practices.

For some of us, seeing this linkage has been a journey. It has been for me.

It’s taken me some time to realize the connection between the police shooting an unarmed Black man, for example, and the environment. When Philando Castille was shot by police on Larpenteur Avenue, just 1 mile from the Institute on the Environment’s headquarters on the University of Minnesota Twin Cities campus, members of the IonE community walked to the site in solidarity. We encouraged discussion and held space for staff, faculty, and students to share information and feelings, but we did not scrutinize our programming or activities. We did not directly ask the critical question: What can or should our organization do differently, knowing what Philando Castile reveals about our society and our world?

My own view at that time was that we needed to “stay in our lane,” making space for what had happened but staying focused on environmental issues. I was concerned about mission drift, and I couldn’t see the full connection between what had happened to Mr. Castile and our organizational mission and responsibilities.

But today I see a common thread of racism – from disproportionate violence at the hands of police to disproportionate exposure to environmental pollution and increased risk for experiencing flooding or fire, as I mentioned above, as well as differences in access to environmental benefits, such as parks and other green spaces. These impacts have overlapping root causes and drivers. To help build a future where people and planet prosper together, we must ground ourselves in the common cause of inequality and environmental harm – and deploy our theory of change in overcoming them.

Having recognized these connections, those of us who work within academia – university researchers, educators, and staff – have to take stock of this truth: We are part of the problem because we’re not part of the solution, enough. At a minimum, our information and our purported solutions aren’t working, or working well-enough, or fast enough, or for enough people. We are working hard, but are we working in a way that engages and helps people directly, that allows them the benefits of our work?

I believe we must engage in a new era of accountability to specific socio-environmental outcomes. This accountability isn’t just code for “applied” research and education. It means pursuing discovery and learning that is relevant, meaningful, inspiring, participatory, co-produced, useful, and used.

The higher education sector has the essential ingredients to more purposefully and completely fulfill our public mission, including – importantly – expertise and capacity within the university itself. We also have a powerful way of working: interdisciplinarity. Interdisciplinarity promotes relationships and allows us to address complex issues more synergistically and more completely. This way of working is at the heart of IonE.

But have we done enough to bend these ingredients toward action with – and for – people and their communities? From where I sit, American universities have not paid enough attention to outcomes, consequences, and issues that affect all people and the environments they depend upon and care about. And where we do deliver on those outcomes, we haven’t sufficiently valued or celebrated those achievements within our university culture.

If we were living up to our social contract and our obligation to bring about specific and tangible public benefits, the problems before us would be less debilitating, less heart-breaking, and more manageable. I also think we’d lay the groundwork to build a new kind of public trust in science, the value of expertise, and learning.

IonE is here for this work. In June, I wrote on this blog that we – the Institute on the Environment – would work toward becoming an anti-racist organization. I’m proud to be able to report today that that work is underway.

We are starting to apply an anti-racism lens to our flagship initiative, Impact Goals, through which we strive toward sustainability outcomes using interdisciplinary research and education, in direct partnership with communities and other entities. Earlier this year IonE funded six Impact Goal research projects that are direct collaborations with communities and other stakeholders; target specific technical and social outcomes; and are responsive to racial justice. Imagine if there were 600 projects – or 6,000 – like this, and if they were connected together so that the benefits and beneficiaries of each one spilled over to all.

We have also been thinking about anti-racism in adjustments demanded by COVID-19. We were confronted this summer with dozens of worthy, ambitious undergraduate students with financial need, who were watching traditional summer internships vanish. So we wrote to dozens of community-based organizations and programs, many committed to anti-racism and justice work, and asked if they could benefit from hosting a virtual intern, in this difficult, disrupted summer. In total, we were able to place 22 undergraduates from 17 majors in 20 organizations, from small NGOs to community projects and young companies. The connections made – that might not have happened in the old approach – were inspiring; the benefit, immediate. Imagine if this pilot became the seed of a sustainability corps of university students who could be placed in community organizations, near and far, every summer.

I share these two examples in the spirit of transparency and learning – fully aware that the process of becoming authentically anti-racist is long. One of the most important things we’re doing inside IonE has been preparing to open a call for a change team: a supported, standing workgroup of staff, students, and faculty who will help IonE chart a path for long-term change.

Dismantling racism while protecting the environment – understanding that it is actually one stream of work – isn’t easy. Importantly, we must not be afraid to tackle hard things and stay with them when the temptation to retreat is strong. As academics, we must recommit to impact and the importance of our obligation to society, and we must extend that commitment to dismantling racism. This is necessary so that our university – all universities – can reverse the direction of deep challenges before us, become a stronger force for good in the world, and lead through action and example.

P.S. This blog post is adapted from my director’s remarks at the 2020 IonE Annual Meeting. You can watch the full presentation here.