As NatCap turns 10, a Q&A with co-founder Stephen Polasky 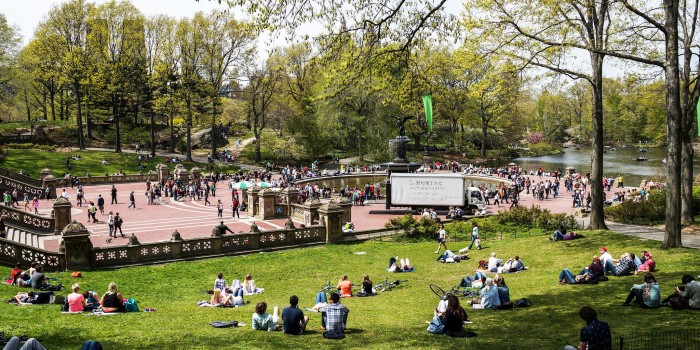 This article is repubublished with permission from the Natural Capital Project and the author, Stacey Solie.

How much does clean air contribute to a society’s well-being? Or having access to the calming shade of a city park? Economic systems that shape our built environment often fail to account for the contributions of natural systems, such as those that naturally filter and cool the air we breathe. The Institute on the Environment’s Natural Capital Project works to change the way people think about nature and to integrate the value it provides into land use and development decisions.

Economist Stephen Polasky co-founded NatCap at a time when economics was still viewed with suspicion by many conservationists. In an interview commemorating his 10 years with the organization, Polasky, a professor in the College of Food, Agricultural and Natural Resource Sciences and an IonE fellow, opens up about what it was like to be seen by some as an enemy of conservation. He also talks about what’s inspired him along the way, including how both China and Rwanda have embraced conservation as a way to bring prosperity to people, and whether NatCap has accomplished what he imagined back in the beginning.

Where did your environmental values come from? Did that precede your study of economics?

I cared about the environment long before I cared about economics. I grew up in Ann Arbor, Michigan, in the ’60s and ’70s during a time of environmental activism. I watched the news of the Cayahoga River catching fire, the first Earth Day, the formation of the EPA. The events of the time made a big impression on me and I wanted to focus on environmental issues from the time I was a teenager. I did not pick up the interest in economics until college. I have an analytical and mathematical orientation and economics seemed to me to be a great set of tools and way of thinking that could be applied to environmental issues.

How do conservationists view economics these days?

Things have progressed a long way from when I first started in this. There were times when I was the only economist in a room of conservationists. Occasionally I would get “You’re part of the problem, you’re part of the enemy.” I don’t get that now. We, as conservationists, realized we need to have economists on board, and we need to find out how to provide incentives and change the economic system.

Are you ever still treated as the enemy?

There are still some people that make the claim that by dealing with the economy we are getting into the dark side, that this is really a moral argument. Just because I’m an economist doesn’t mean that I don’t have morals and ethics.

There are certain things in the environmental arena that we would just say are immoral. Poisoning water that people depend on to drink would be viewed as wrong. But there are other cases that don’t fit this category. I’m looking outside now at the people driving their cars. Driving is not immoral, but it has negative consequences. We have to figure out how to do the things that we want, which is to get places, in a way that doesn’t poison us by having such polluted air.

Sometimes I drive my car and I think I might be immoral.

Yeah, evil! (laughs) I bike to work when I can, but there are days in Minnesota when it is zero degrees outside and there’s snow on the road, and it’s dark. Sorry, I’m going to drive today.

Media often characterize NatCap’s work as “putting a price tag on nature.” Is it a problem that that becomes the tagline?

It is a problem when this becomes the tagline because it’s like the tail wagging the dog. I think about the work we do in The Natural Capital Project and the valuation component of it is maybe 10 percent, or a quarter. A lot of the work in what we do comes well before valuation. It’s showing how actions that we take influence the environment and influence the provision of services. That’s the bulk of what we spend our time doing.

Taking a look back at work you did before joining NatCap, in the 1990s you served on the Council of Economic Advisers to the Clinton administration when the Clean Air Act and climate change were two big issues. A lot of people think of environmental regulations as a hindrance to economic growth. Is that true?

It would be wonderful if we could have clean air and not have it cost anything. There often are direct costs for improving air quality or environmental quality in general. But bad air quality and bad environmental policy also impose costs. I just got back from China, where economic growth has been a priority, more so than clean air. Air pollution extracts a huge cost in China. Some of those costs show up as losses in productivity. The health statistics in China are fairly grim. A recent paper estimated that the air in Beijing is so polluted that breathing it is like smoking 40 cigarettes a day.

What were you doing in China?

What are the ecological trends they’re seeing across China?

Beginning in 1998, the Chinese government made big investments to protect and restore ecosystems. Now they have the largest ecosystem services restoration project in the world, called the Sloping Lands Conversion Program, which calls for returning 37 million acres of cropland on steep slopes back to forest or grassland. There are a number of areas where they’ve seen improvement, including habitat protection and reduced erosion and sedimentation.

They’ve taken up InVEST and some of the approaches of the Natural Capital Project in figuring out where to site Ecosystem Function Conservation Areas. Part of the analysis is biophysical: Where are areas susceptible to erosion? But it is also important to take account of how this affects people. Is erosion occurring in areas where there are people downstream that depend on clean water? Or, for sandstorms, it is important to think of places downwind. If it’s going to happen in the middle of nowhere it’s not as important as preventing sand blowing from areas that might end up in Beijing.

You also spent time in Rwanda during this trip?

This was a SNAP (Science for Nature and People) working group to think about how to incorporate the value of natural capital into government planning and the national accounts like GDP. In Rwanda a big thing is tourism as well as water quantity and water quality. How do we show that particular actions or investments actually pay off? One part of the group had done a study of the impact of national parks or the creation of protected areas and how these contribute to the larger economy. Natural capital in Rwanda overall accounts for 40 percent of the country’s economic wealth, which is among the highest in the world.

I still think of Rwanda as being a war-torn region.

Rwanda is cool. Rwanda is a remarkable story. Everybody thinks of the 1994 genocide, which was horrific. I went to the genocide museum there. It’s very, very powerful. It’s just horrific, a million people were killed. But the country has been transformed. It’s one of the most hopeful places on the planet right now.

What’s going on in Rwanda that’s so inspiring?

I went to a meeting on conservation there billed as the first national conversation about conservation with government ministers, NGOs and stakeholders. One of the featured speakers was Dr. Amy Vedder. She has worked in Rwanda since the 1970s. When she first got there the international conservation organizations said “This place is hopeless, don’t even bother.” She and others persisted and now they have national parks and protected gorilla populations. The parks are a huge draw. Every year they have a ceremony to name baby gorillas. This year the president of Rwanda came and spoke at this event. It’s a thing of pride. It’s just really cool. It’s like, wow, 20 years ago would anyone have expected this? Probably not.

How well do business and finance economists respond to your work?

There’s great interest among corporations in how to do a better job of incorporating the value of nature. There’s generally a concern with climate change and an issue called stranded assets. Suppose you invest in a coal plant and 10 years down the road, and with climate change and carbon emissions being a huge concern, it turns out that burning coal is not a viable activity anymore. You’re stuck with this huge “stranded asset.” So people are looking out into the future and trying to anticipate where society is headed.

So, avoiding stranded assets is one way a natural capital approach is useful to business. From an economic perspective, where does the tension between environmental and business interests originate?

Oftentimes the values of nature are what economists call public goods, so they don’t show up on private corporation balance sheets. So if some company does something that improves the water quality for people downstream, that’s good for society, but the corporation doesn’t capture that value. It can be really hard to convince corporations to do things for the public good when it has a private cost to them. Frankly that is the essence of the problem that we have, the incentives of corporations or individuals to do things don’t align with what’s good for all of society.

People have often said, ‘You’re in conservation and you’re in economics, don’t you see some contradictions? I think what I do is basic, good economics. If you’re going to do benefit-cost analysis, then you should actually get all of the benefits and all of the costs, not just the ones that are easily valued in the marketplace.

NatCap has been around for 10 years. Has it achieved what you hoped when you first started this with Gretchen, Peter and Taylor? [Peter Kareiva and Taylor Ricketts are co-founders]

I always get impatient. I want to see more changes more quickly. Of course prices should reflect real impacts, and we ought to have mainstreamed much more about natural capital than we have to date. We’re still off to the side. There are still Wall Street economists that can go their whole careers without thinking about natural capital. That’s just not right for the 21st century.

What do you imagine NatCap will be like in 2025?

At the beginning of NatCap, Peter Kareiva said we should be done and wrapped up in five years, maybe 10. I hope that we are wrapped up at some point, that we’ve accomplished what we set out to do. I think moving institutions as large as the whole of the way the economy is organized is a little bit more than a 10-year project.

It might be more than a 20-year project. But I hope we see major progress by our 20th anniversary.