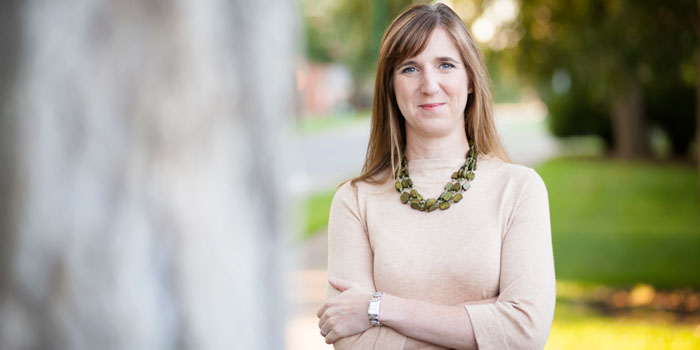 Jessica Hellmann, director of the Institute on the Environment, will be among eight individuals and organizations recognized Monday evening at the National Adaptation Forum in St. Paul, Minnesota, as recipients of the Climate Adaptation Leadership Awards for Natural Resources.

The Climate Adaptation Leadership Awards were established in 2016 to honor exemplary leadership in supporting the resilience of natural resources and the people, businesses, and communities that depend on them. A leading ecologist studying the impacts of climate change, Dr. Hellmann was recognized for her decades of work revealing the sensitivities of rare species and the factors that affect their adaptive responses, as well as her critical role in proposing and critiquing new management techniques for climate change.

“I’m honored to receive this award and recognition,” said Hellmann. “My fellow awardees are doing extraordinary things to help people and the planet thrive in the future — something I work hard to do in my research and in my collaboration with natural resource managers.”

Fellow awardees include the co-authors of the National Park Service Coastal Adaptation Strategies Handbook, as well as the 1854 Treaty Authority and the Bois Forte, Fon du Lac, and Grand Portage Chippewa Bands, who collaborated to produce a territory-wide Climate Change Vulnerability Assessment and Adaptation Plan. Individuals Bruce G. Marcot, PhD, of the U.S. Forrest Service; Dr. Amber Pairis of the Climate Science Alliance – South Coast; and Michael Durglo, Jr, of the Confederated Salish and Kootenai were also honored, along with the Wildlife Conservation Society Climate Adaptation Fund and the creators of the Massachusetts Wildlife Climate Action Tool.

These are “individuals and agencies who are developing and using innovative methods to safeguard the nation’s living natural resources from a rapidly changing world,” said Kevin Hunting, Chief Deputy Director of the California Department of Fish and Wildlife and co-chair of the Joint Implementation Working Group of the National Fish, Wildlife, and Plants Climate Adaptation Strategy (NFWPCAS), which sponsors the awards.

“Their leadership is a source of inspiration for additional efforts to advance climate-smart resource conservation and management with lasting positive impacts on the nation’s communities and economy.”

Adapted from a news release by Davia Palmeri, Energy and Adaptation Program Manager, Association of Fish and Wildlife Agencies. Questions about the award may be directed to dpalmeri@fishwildlife.org.