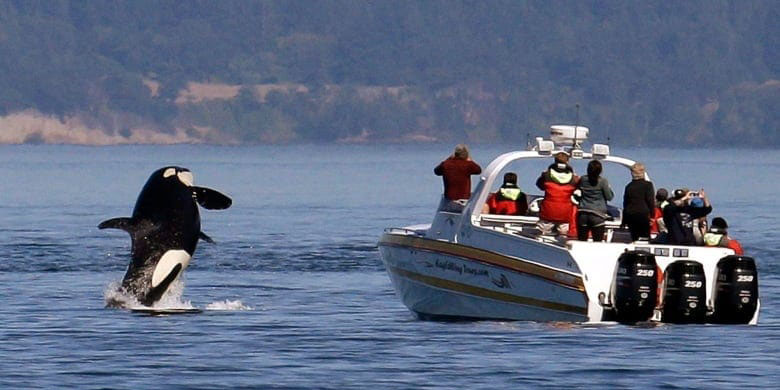 Sentinels of Silence? Whale Watching, Noise, and the Orca, is a new documentary short focusing on the threats to the Salish Sea’s few remaining Southern Resident Killer Whales. Institute on the Environment Fellow Mark Pedelty is the director of the film. Pedelty is a professor of Communication Studies and affiliate professor of Anthropology at the University of Minnesota and has spent many years studying interrelated questions of sound, communication, and the environment. He is also the director of Ecosong.net.

Pedelty made the Salish Sea in Washington and British Columbia his main field site for sound-related research around 2000. After years of visiting in-laws in the region, he and his wife, Karen Miksch, who is also a faculty member at the University of Minnesota, decided to build a small cabin on Orcas Island in the San Juan Islands of Washington. The connection runs deep, Pedelty says: The University of Minnesota actually established and ran the very first research station on the Salish Sea, from 1900-1907, and this UMN-Salish Sea partnership extends that legacy into the present.

On November 4, Sentinels of Silence? will kick off its public release with a streaming panel conversation featuring scientists, conservationists, and policy advocates, co-sponsored by IonE, the Georgia Straight Alliance, and the Salish Sea Institute at Western Washington University. In the lead-up to the release, we had the opportunity to talk with Pedelty about the film, communicating science, and the impacts of the whale watching industry on the orca population.

Was there a specific moment of inspiration for this project?

I was kayaking on the coast of Orcas Island when I was suddenly joined by a pod of transient orcas (not the Southern Resident Killer Whales), and the large flotilla of whale watching boats that trail and corral whales throughout the day. With what I know about sound and animal communication more generally, I was moved to read the bioacoustics literature about the orca to find out how such activity affects these amazing creatures. That in turn led me to produce and direct a music video about marine noise, with an international team of scholars, artists, and musicians. Through doing that work and circulating the video, I met the amazing people that appear in this film, and wanted to help them tell their story to the world.

The Southern Resident Killer Whales have become a symbol of the Salish Sea, but there are now only 73 left. What are the biggest challenges causing the population to decline?

Sound is often neglected, ecologically speaking. And, in the case of the Southern Resident Killer Whales, noise has been demonstrated to be one of three major factors threatening them. The biggest threat is the parallel decline in the Chinook Salmon. Another is the incredible toxin load these apex predators have to take in over their lifetimes. The third is sound disrupting the whales ability to communicate, coordinate the hunt, enculture their young, and survive.

The title of the film refers to the argument that smaller whale watching boats act as “sentinels” for larger, commercial vessels, forcing them to keep their distance from the whales. What does the evidence tell us about this debate?

The articles and scientists cited in the film call that into question. Given what we know about the behavior of sound underwater and the need for a quiet(er) sea for the orca to communicate – as well as measurable impacts on their foraging behavior in crowded and loud waters – it only makes sense to give them more space and peace and quiet. And, the commission’s own subpanel determined that the sentinel claim cannot be demonstrated.

Frankly, I have seen how even the current lax regulations are ignored when Fish and Wildlife boats are not there to monitor the situation. Sorrel North, a local activist with Southern Resident Protection, says it best in the film: “We can stay 6 feet from another person to protect them, why can’t we stay 650 feet from a whale?” There is too much market incentive for the whale watching companies to trail the whales under power and get too close. We decry putting whales into shows at SeaWorld, and for good reason, yet we have turned the Salish Sea into a bigger, but no less problematic, version of SeaWorld.

It’s amazing that you were able to shoot this film this past summer. How did the pandemic affect filming and production?

It was a tough decision: suspend and delay filming or do it using social-distancing protocols. I decided on the latter, which meant that I’d have to do the videography myself, instead of having the amazing Karl Demer of Atomic K Productions behind the camera. He still edited the film, while I directed, but this was the first time I shot one of our films. The scenery, people, and story were so amazing that it worked out. And, there are worse ways to spend a pandemic than chatting with nice people on the beach from behind a mask and at a safe distance.

Original music is an essential part of Sentinels of Silence?, as well as ecosong.net’s other projects on road salts, erosion, and rain gardens. How do you see the interaction between music and activism?

The film gave a new purpose to our song LOUD. To have voices like Canada’s Felicia Harding and the USA’s Dana Lyons sing during the end credits, for example, really added a sense of community soundscape. My good friends and fellow UMN professors Bob Poch (on drums) and Tim Gustafson (on guitar) made the instrumentals work. We used actual orca sounds sparingly in the film, only where appropriate, because they deserve their own space to be fully appreciated, in context.

How do you hope the film will be used in educational settings?

I hope that students that watch the film get involved in the public participation processes surrounding orca conservation, whether at the state, provincial, federal, or international levels. Hopefully the film and supplementary site will help students learn about the vital public participation processes available to all of us, and so essential to effective conservation.

I made sure to give Jeff Friedman, President of the Pacific Whale Watch Association, a platform to present their perspective on the problem. While my interpretation of the science is different than Jeff’s when it comes to the impacts of noise and what to do about it, I do hope that someone can watch this film and, if more persuaded by the industry’s sentinel claim, to argue for that position in the public arena.

The goal of the film was to explore the science surrounding noise and the orca, as well as the current policy debate that is informed by the science, bioacoustics in particular. Often the best possible outcomes are negotiated. The compromise that seems to be emerging at the Washington Fish and Wildlife whale watch licensing commission is far better for the sake of the whales than could have been imagined a year ago.

What do you hope that people take away from this film? Are there any more resources or opportunities for those who wish to get involved?

You can explore our supplemental site at ecosong.net, which has many more resources based on the film. You can also provide your two cents to the licensing commission before November 13, the deadline for incorporating feedback in a public participation process. They want to hear from everyone.

And, of course, this is not just for the 73 remaining Southern Resident Killer Whales. It is for us, their cousins on land, for the broader marine ecosystem, and for future generations of whales, people, and salmon that deserve to experience a world that is biodiverse, healthy, and just.

Interested in seeing the film? Limited (free!) tickets are available for the November 4 public release of Sentinels of Silence?, featuring a panel event co-sponsored by IonE, the Georgia Strait Alliance and the Salish Sea Institute at Western Washington University. Attendees will receive a link to screen the film.

You can also download this Q&A as a PDF – with a reflection exercise on public participation processes.

Isa Guitian is a senior at the University of Minnesota and a communications assistant at the Institute on the Environment.