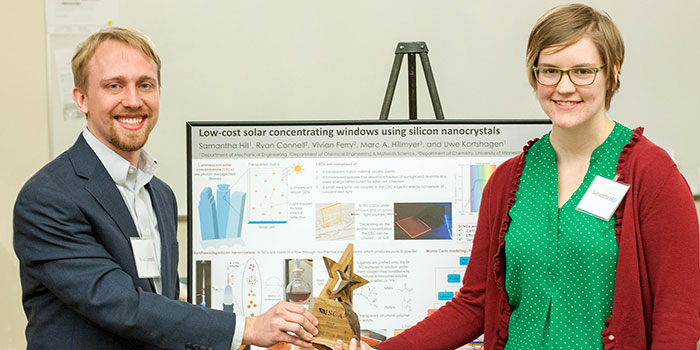 What if the windows that bring natural light into our buildings could also be working to convert that sunlight into energy? A project to advance this world-changing goal won the 2017 Dow Sustainability Innovation Student Challenge Award, an annual University-wide, solutions-driven competition for graduate and professional students hosted by the Institute on the Environment.

College of Science and Engineering Ph.D. students Ryan Connell (Materials Science) and Samantha Hill (Mechanical Engineering) point out that traditional photovoltaics – for example, solar panels – don’t lend themselves to applications with aesthetic demands. “As a result,” the partners explain in their project summary, “most of the building surfaces in our cities that could be used for solar energy harvesting remain unused, such as windows.”

Employing silicon nanocrystals, Connell and Hill developed an efficient, non-toxic, large-area and semi-transparent LSC. Silicon, they note, is the second most abundant element on Earth – it’s both low-cost and environmentally friendly. In their work, the partners were able to demonstrate the feasibility of dispersing the silicon nanocrystals in polymers, for ease of fabrication, and predict a 5x concentration of light onto solar cells.

“We’re grateful for the opportunity IonE provided to share our work to create solar energy harvesting building materials and the support to bring it into a commercial space,” said Connell and Hill. They also expressed gratitude to their mentors and advisors, CSE’s Vivian Ferry, Uwe Kortshagen and Marc Hillmyer (an IonE Fellow), as well as their respective groups for their feedback and guidance.

Runners-up Bryan Voigt and Jeff Walter also presented work to advance solar – resolving challenges impeding the use of low-cost, Earth-abundant pyrite FeS2 as a solar cell material. The research partners, who are also Ph.D. students in the College of Science and Engineering, solved a long-standing doping puzzle in FeS2, as well as developed a model to describe its diverse surface properties, among other advances. Their research paves the way for large-scale, sustainable FeS2 solar cells. CSE professors Chris Leighton and Eray Aydil, who is also an IonE Fellow, served as advisors.

“We’re very proud of all of these students,” Aydil says. “They gave terrific presentations on first-rate scientific work – while looking like seasoned entrepreneurs.”

The Dow SISCA competition is made possible by a collaboration between IonE and the Dow Chemical Company. The nine finalist projects were judged based on excellence in research; innovation of idea; sustainability (including alignment with Dow’s 2025 sustainability goals); scale and importance of the problem addressed; and viability of moving the research into practice, whether that’s in the marketplace or the world at large. The grand prize winners receive $10,000, intended to support the pursuit and implementation of their project idea, and the runners-up, $2,500.

The University of Minnesota’s Institute on the Environment works to accelerate the transition to a sustainable future by supporting innovative research across the disciplines, cultivating change agents, and building transformative partnerships within and beyond the University.